Notice: Function is_feed was called incorrectly. Conditional query tags do not work before the query is run. Before then, they always return false. Please see Debugging in WordPress for more information. (This message was added in version 3.1.0.) in /home/u440231981/domains/wewalk.lv/public_html/wp-includes/functions.php on line 5835
 Morocco trip, Toubkal hike, Marrakech - WeWalk adventures

Marocco tour. As a child, did you dream of being in the magical place where Aladdin and Jasmine fell in love? Walk through the Oriental Bazaar, discover the desert riding camels and fly over the city on a flying carpet.  An oriental fairy tale has long been not only animation – everything that you pictured in your mind when thinking of the  “magical east” – comes to life in Morocco! The journey that WeWalk has prepared for you has absorbed the most extraordinary parts of this mysterious magical land.

On an adventure across North Africa, we will climb Mount Toubkal, overlooking the entire Atlas Massif and the Sahara Desert, plunge into the atmosphere of traditional Moroccan cities, walk a caravan through the sands of the Sahara and finish our voyage surfing the Atlantic waves! We do not need heavy backpacks and tents – it is more pleasant to imbue the love of Morocco with light and staying in hospitable traditional houses – riads, small lodges and mountain climbing shelters! Twelve fabulous days in Morocco in which our guides will become your “genies of the lamp” to show you how wishes come true!

Anyone can safely go on this trip, regardless of experience and physical condition. The light backpacks and the overnight stays in comfortable and authentic guest houses make this experience possible for everyone, regardless of age and physical fitness. To climb Toubkal, you will need mountain boots and membrane-protected clothing, but everything can be rented on the spot right before the ascent.

All overnight stays during the trip are held in guest houses, hostels and mountain huts, which have everything we need for a comfortable stay. Meals are served in guest houses or local cafes and restaurants. The weather in Morocco is warm all year round, but it is worth remembering that at night the temperature drops to 5-10 degrees Celsius, and also that we will find snow on our ascent to Toubka. Taking a fleece and a jacket to stay in the mountains is recommended.

Small groups up to 16 people

Key elements of the adventure 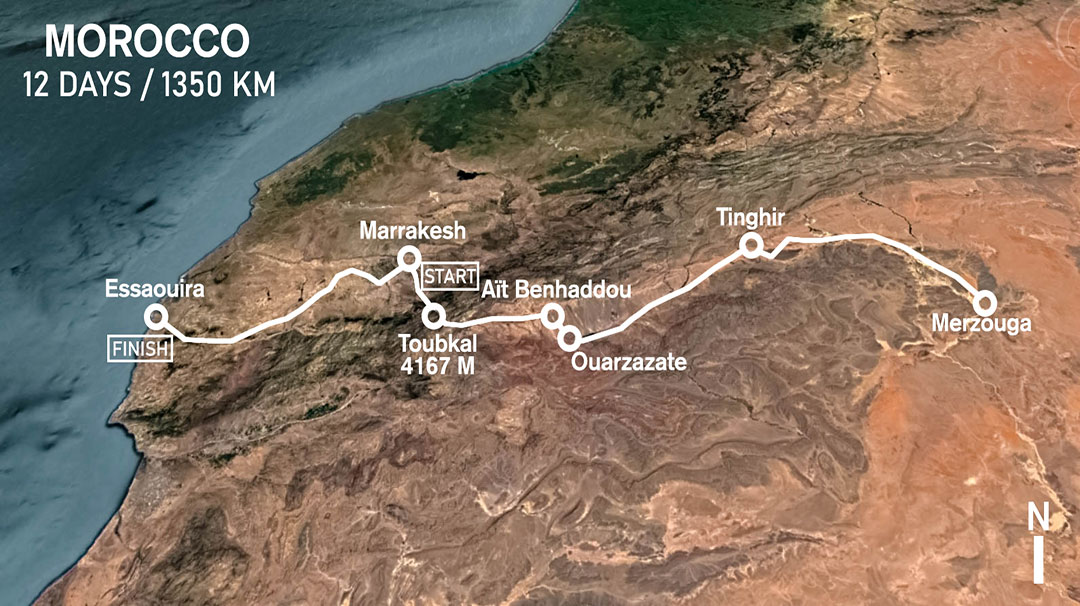 First group meeting at a hostel in Marrakech. Waiting for the arrival of all the adventurers, we will rest after the flight on the Riad’s terrace. In the evening we will walk through Medina to the famous market square of Gemma-El-Fna, which is always full of musicians, fakirs, snake charmers …perfect ingredients for an unforgettable atmosphere!

We will take a minibus to the mountain village of Imlil, where we will check into a lodge and lightly go on an acclimatization hike towards the Tizi Mzik pass. After a snack on the way, we will return back to Imlil.

We will start our way up to the Toubkal mountain shelter. Throughout the day we will climb the valley of the Oued Rheraya river until we reach the shelter at an altitude of 3200 meters. Getting used to the altitude and going to bed early to rest before an early ascent.

In the dark, we will wake up and start climbing towards the top. Most of the trail passes through dense snow, which means crampons will be needed. The ascent to the top lasts 3-4 hours, the descent takes 2 hours. After the descent we will rest in the shelter by the fireplace.

In the dark, we will wake up and start climbing towards the top. Most of the trail passes through dense snow, which means crampons will be needed. The ascent to the top lasts 3-4 hours, the descent takes 2 hours. After the descent we will rest in the shelter by the fireplace.

We will descend to the village of Imlil, where the trekking part of our adventure in Morocco ends. Upon arrival in Marrakech, we will check into a beautiful traditional riad, where we will rest off the road. Today we will visit the Majorelle garden, once laid out by the painter Jacques Majorelle, after acquired by Yves Saint Laurent, and now the complex houses museums of both artists. Later we will take a look at the Bahia Palace, decorated with unique mosaics in medieval technique and style.

By bus we will go to the Moroccan film capital – the city of Ouarzazate. We will go on an excursion to the Atlas Film Studio, where “Gladiator”, “Game of Thrones”, “Alexander” and many other films were filmed. Then we will go further to the East to stop near the town of Tingir in the incredible Todra gorge, with sheer walls and oases around.

200 kilometers to the East, in the settlement of Merzouga, we will sit astride camels and set off on them through endless dunes. Once we reach our camp in the middle of the desert, we will still have time to try sandboarding and take photos at sunset. In the evening we will enjoy an unforgettable dinner and Berber dancing to the beat of the drums.

We will return to Merzouga and from there we will go to the city of Ait-Ben-Haddou, an ideally preserved Berber village-fortress where a huge number of films were filmed. Such a place is not to be missed!

After breakfast, we will take a short walk in Ait Ben Hadd, and head to Essaouira, a magnificent pirate fortress city on the shores of the Atlantic Ocean. Here you can buy the best souvenirs, taste the most unprecedented fish and seafood, climb the fortress walls and swim in the ocean.

It’s time to ride the wave! Let’s go get the boards and test our surfing skills! After training in the ocean, we will rest in the medina, and in the evening we will enjoy a traditional Moroccan hammam.

The moment for us to say goodbye, go east and head home has come. Those who wish can stay longer by the ocean for surfing and recreation.

We’ll get in touch with you.